Mr. Gaither began practicing law in 2006, and joined Neligan LLP in 2009.  Mr. Gaither takes a pragmatic approach to problem solving and works to resolve clients’ disputes as efficiently as possible, so that they can focus on what they do best — running their businesses.

Since joining the firm, Mr. Gaither regularly represents debtors and creditors in Chapter 11 proceedings across a broad array of industries, including hospitality, retail, media, real estate, healthcare, and financial services industries.  Mr. Gaither also handles bankruptcy and receivership litigation.  He assisted with the firm’s representation of the SEC-appointed Receiver and the Official Stanford Investors Committee in the the Stanford Financial Group receivership, which stemmed from the Allen Stanford Ponzi scheme, one of the largest Ponzi schemes in U.S. history.  Mr. Gaither helped to recover over $350 million for the benefit of the Stanford investors, which involved multiple matters appealed to the Fifth Circuit Court of Appeals and one to the United States Supreme Court. 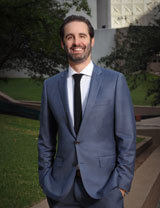